Den was sedated for the night, so I finally got some sleep. The nurse and I gave him a bath before dawn and all his dressings were changed. His temp is up to 101.3, but all his other stats are good and stable.  They took more chest x-rays this morning. And he is now up to 6 IV bags of meds going into his central line. The doctors added an anti-anxiety med this morning. I think it is to help him stay calm so they can get him extubated. The psych doctor stopped by to see how Den was doing. He said he would be back when they extubated Den. The nurse had to turn the cooling blanket back on to keep Den’s temp controlled.

Just before 9AM, the LVAD team came in. Dr. Sayer told me that Den had pneumonia and that antibiotics had already been ordered, diuretics would be started tonight and they wanted to try to get Den extubated today. Otherwise, everything looked good.

So, the nurse reduced Den’s sedation. About and hour later, Den was awake and responding to verbal commands! Progress! He indicated that he was in pain, so the nurse go him something immediately. That was about the time that Dr. J, the surgeon, came in to check on Den. He wanted to go slowly on the extubation. First, the vent would be put in CPAP mode. This way Den would be breathing on his own, but the vent would support him when he inhaled to make sure his lungs fully expanded. He also put in an order with respiratory to give Den berating treatments to help clear the pneumonia. Those would start immediately.

At 11AM, the first of Den’s “life lines” was removed. The Arterial line in his groin was taken out! One down, many to go. And they put cushion boots on Den to prevent pressure sores on his legs.

Now understand Den had been awake for a few hours at this time and we had been trying hard to find a way to communicate. He was getting more and more frustrated. He couldn’t talk due to the tube in his throat. All he could do was shake his head. Yes and no questions are like groping in the dark…sometimes it seems you will never find what you are looking for. It didn’t help that Den was still in wrist restraints. This made holding a pen and paper impossible. I finally gave him my MP3 player with Celtic Women on to listen to and that seems to help him calm down.

By 2PM, Den was moving all of his extremities weakly, but moving! Strength would come later.

One of the doctors came by to let us know that the decision had been made to keep Den on the vent for one more night. He was breathing faster that normal and he had an electrolyte imbalance that needed to be corrected…not to mention the pneumonia. The plan was to check his numbers early tomorrow and then try to get him extubated. Just after the doctor left, Den started to have trouble with the ET (Endotracheal Tube), this is the one connected to the vent. Den was awake and coughing more than before. By 415PM he could not take a deep breath. The nurses came in and suctioned Den’s lungs thru the ET. They got lots of mucus out and Den felt better and was breathing better afterward.

Den got breathing treatments every 4-6 hours…there were 2 different meds he was getting, a bronchi dilator (to help open his airways) and something to thin the mucus. The nurses were giving Den nourishment thru the NG tube in is nose continuously. He was also getting some of his medications through the NG. The nurse would crush up the pills and mix them with his nutrition or water and then push this trough the tubing into his stomach. 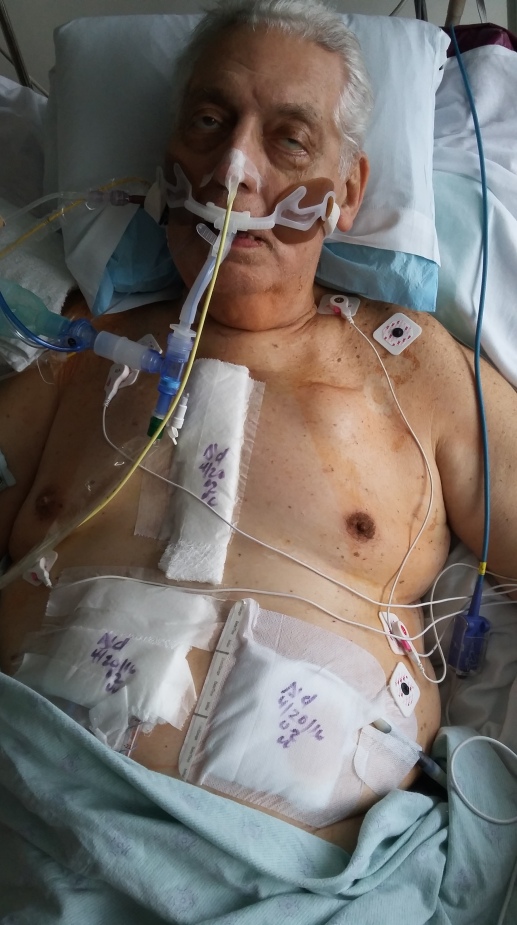 Later that evening, the nurse asked Den if he would like a bath. He indicated yes..this was the first one he would be awake for since surgery. You could see on his face that it felt good to be washed. Even tho he couldn’t help us, I know it made him feel just a little more normal.

Around 930PM, Den fell asleep and seemed comfortable. Maybe tonight would be a good night for us both. But that was wishful thinking. Den seemed to wake up every half hour confused and scared. He would bang on the side of the bed to wake me up. I would try to find out what was the matter, but communication was still very difficult. So it was an arduous process with both the nurse and me trying to figure out what Den was trying to tell or ask us. This went on ALL night. I kept thinking, if only the ET was out, this would be so much easier…and I think Den was thinking the same thing.