The first indication I had that it was the next day was when the sun started to shine through the windows. I had been up for the last 24 hours and running on only adrenaline by this time. I had promised Roberta, Den and my family that I would make sure to eat and take care of myself. I did force myself to eat at least twice a day.  I tried to schedule my trips to get food around times that the doctors would be around. That first full day after surgery, I didn’t leave the room at all. One of the nurses knew us from CICU, and would stop by with food for me. She would stay and talk about how things were progressing and I know she was checking up on me more than Den.

Just before dawn, the nurse and I gave Den a bath. I don’t know if he knew we were doing it, but it made me feel better just to do something.

His LVAD speed was still at 4600 (the lowest speed setting). During those early hours after surgery we had 420 low flow alarms, but that would change soon. They had needed to restart the Nitrox in Den’s vent during early hours..his pulmonary arterial pressures were elevated. This also meant that they needed to keep him fully sedated. The staff had added a cooling blanket under him when his core temp hit 101.6. He was still having blood draws every 4 hours and chest x-rays regularly. His blood glucose was under control, thanks to the insulin IV. The cooling blanket seems to be working. An hour after it was put under Den, his temp was beginning to drop. Slowly, but it was going in the right direction. His chest tubes were draining fluid well and it was not bloody fluid, just fluid.

Around 7AM, they had weaned Den down to almost no Nitrox in his vent. He became very restless and irritated, so they again upped his sedation. I tried to calm and sooth him each time he started to thrash in his bed. The nurse told me that I was agitating him and not to touch him anymore. I knew this was not the case, but I sat on the couch and cried for a while. It hurt me even more to sit by and see him thrash in what I can only assume was pain and not be able to help him.

One of the surgical team came in to check on Den’s progress. He said that all of Den’s numbers looked great and he was stable at this time. The team would be checking in on him regularly while he was in ICU. He also said that the plan was to get him extubated as soon as possible. They would start trying to exubate him around 9AM.

By 9AM Den’s temp was still moving in the right direction. It was now 100.5. Dr. Sayer, one of the LVAD doctors, came in to check on Den. He said that Den’s pacemaker would most likely be left at his current pacing of 90, which coincidentally was the same oscillation as the LVAD pump. He also told us that we could continue to see our cardiology team at home, but any changes or procedures would need to be done at the University. He increased Den’s speed to 4900 – that stopped the alarms!

The nurses and doctors were ready to try getting den extubated! The first try was at 9AM, with no meds. Den was combative and intolerant. No go. They tried again at 9:30AM, same scenario, same result. They decided to try some meds to help Den at 9:50AM…still the same result. The last try of the day was at 10:30AM with some different meds….still a no go.

At this point the doctors ordered a nasal-gastric tube to be inserted. This is a feeding tube that is put in through the nose into the stomach. Den needed nourishment and this was the only way to get it into his system.

Just after 11AM, they decided to reduce the vent. This was a test of sorts to see if Den would breath on his own. It also helped him to be ready to be off the vent sooner…we hoped. They tried one more time to extubate Den that day. It didn’t happen. At noon, they decided to switch Den to a lighter sedation med for the night. Hopefully we would have more luck tomorrow. The good news is that Den’s temp was almost normal again and all his numbers were “perfect”.

After lunch, Den was awake and very agitated! He popped off the vent tubing 2 times and I had to call the nurse in to get it reattached. He knows I am here. He answers yes/no questions with a head shake. The doctors decided to fully sedate him again for his own safety.

They turned off the cooling blanket during the day, since Den’s temp was normal, but had to start it back up when he started spiking a fever again in the evening. Dr. Hart, from general surgery, came by to check on Den. He said that they would keep him fully sedated tonight and increase the vent support tonight. The plan was to try again tomorrow to get him extubated.

The rest of the night went by with me trying to nap on the couch in between alarms, beeps and dings from all the machines that Den was hooked up to. Tomorrow, maybe I could talk to Den again and not feel quite so alone. 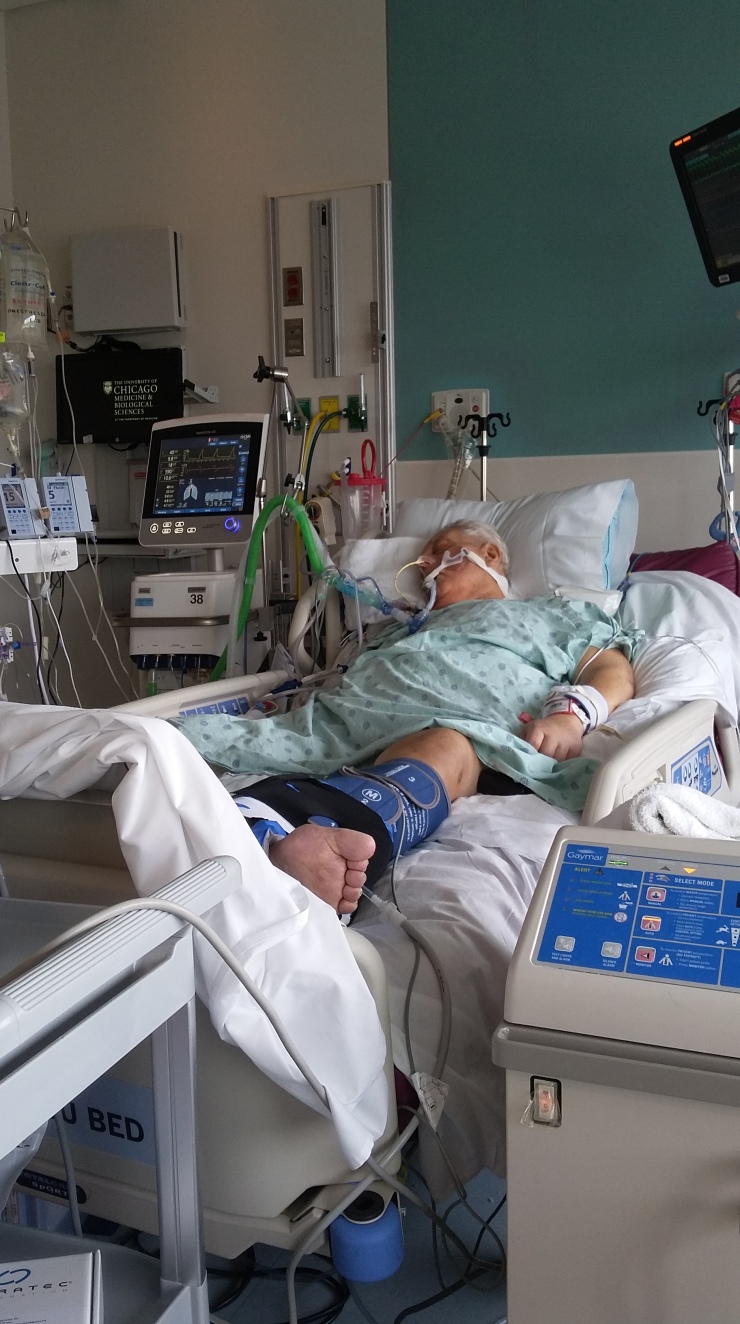