Tonight is the Homecoming game for Em’s Basketball team. This is her last year. She will be graduating in the spring. I had let the coaches know that I would make the roses for the mothers and have them at the game.

I went into work to make the presentation roses. I was not scheduled to work, but I had let everyone know that I would be in for a little while in the early afternoon. I had planned to be there while everyone would be eating lunch, so I would not be in anyone’s way. I made the bouquets in short order and even made a bouquet of red and white roses to give to Em at the end of the game.

I dropped the roses off at home and then went to get Em from school. She needed to eat dinner before 3PM since her game was scheduled for 5:30PM. I don’t remember what we had for dinner, but I know we all ate before we left for the game. My parents said that they would meet us there, since Em had to be there and hour before tip off.

When we arrived, the auditorium (where we play our home games) was decorated with banners of each of the 8th grade players, red and white balloons and lots of other festive items! I helped get Den up the stairs and into a seat. After he was settled, Em and I went to look at all the decorations. (I still have her poster on the wall in my living room.) 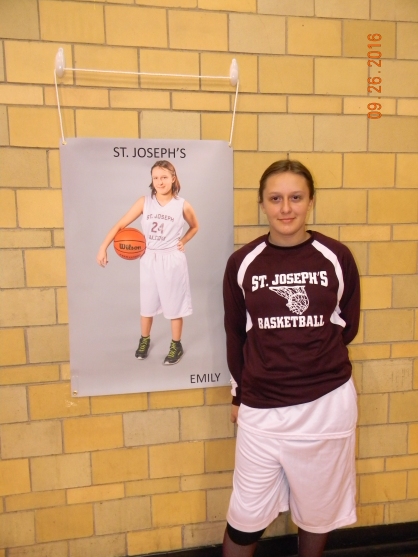 As soon as the team arrived, Em was off to warm up with the other girls. She has always been proud to be a part of the team. Her nickname since day one has been “Beast”. When the coach wants her attention on the floor, he always yells…”Hey, Beast!” Em is a great defensive player. If coach says he doesn’t want someone on the other team to get the ball, he puts Em on that player. His line for this is “Beast, dog that player.” Em may not be the best offensive player, but she works her butt off on the court. She takes shots when she can, but will give the ball up if she does not feel she has a chance to get to the basket.

Back to the game! Just before the game started, the players were introduced. Em was the 3rd player to come out this time. Once all of the players were on the court, the Mom’s of the 8th grade girls were asked to join them. Each 8th grade player had one of the roses to give to their mom as a thank you for the support that the families give these talented girls. The coaches also gave the 8th grade girls a special present. It was a Letterman style sweater with their name on the front and the school mascot on the back…all embroidered. Em would wear this throughout the remainder of the school year!

The girls went on to win the game by an narrow margin, but a win is a win! When the girls were coming off the court, I was there with the roses for my daughter. She was so surprised, she couldn’t speak for a moment. My dad asked if he could take us out for pizza. Em was a little sweaty, but we told her not to worry about it. Dinner was fun and we all enjoyed talking about some of the great plays in the game.