Bear with me as we go into Book 2 of Den’s medial saga. I started this book by dating each page, since that was how I had done Book 1. I found out that is wasted too many pages. If you see a skip in dates on my posts, don’t worry. You most likely didn’t’ miss anything, I just didn’t have any entries for those days. In Book 3, I only date the pages as we go. This way I can use one or more pages for a single date and not worry about overlap. Enough of this dribble….on with the story!

Today Den has appointments with the podiatrist and the orthopedic doctors. First up is Dr. Atkenson, the orthopedic doctor. Den got another shot in his knee. We asked about the weakness that Den was experiencing in his legs and knees. Dr. Athenson suggested some physical therapy to strengthen the muscles and loosen up the joints. He gave us an order and suggested the therapy clinic across the hall, but said we could go wherever we wanted for the therapy.

Next up was Dr. Kamarova, the podiatrist. Den had previously been diagnosed as a diabetic. So he goes every 3 months to have his toe nails cut and his feet checked. Dr. K noticed some nail fungus. He treated it and told us that we could use a topical over the counter ointment to help the process. It would take a while for it to clear and we wouldn’t really see any change until the nails started growing out.

Den has been working on his driving since having his first cataract surgery. He still wanders a little, but each day is an improvement. Today he drove me to work, picked up Em at school and picked me up at the end of the day. It is very strange to sit in the passenger seat after being the sole drive for such a long time. It will take some getting used to, but I am happy that Den is getting back to some of his old activities again.

Last week our chest freezer decided to self destruct. It is still cold, but the lid has decided to fall apart. So today, Den and I cleaned out the porch and emptied the freezer as best we can. When we were done the yard looked like we had had a mini snow storm. 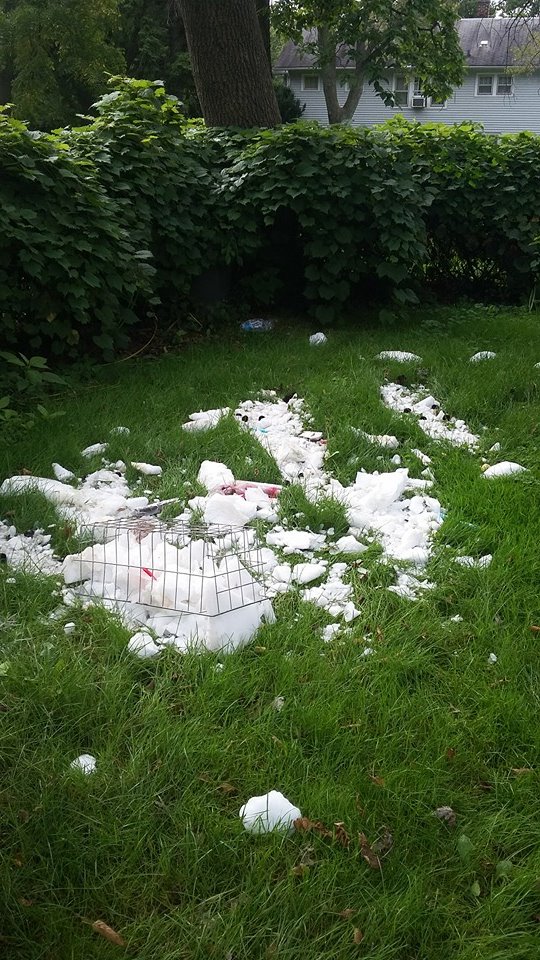 The recycler is coming next week to take the old one away. A newer (but smaller) freezer is already in the garage waiting to take it’s place on the porch.

Today was a normal Sunday for us. We went to mass and then out to breakfast with my parents. It was a beautiful day and we all enjoyed it.

Today is one of Den’s Granddaughter’s birthday. She is turning 21 and the family is gathering for a party to celebrate. Em and I have been invited, too. Den asked if I would take him to see his other daughter’s new apartment before we head over for the party. I reminded him that he had to climb a flight of stairs and he said that he really wanted to try. So we went over to the new place. It took Den quite a while to get up the stairs, but he did it on his own! He was very tired by the time he got into the apartment, but he was happy that he put in the effort to get up the stairs and didn’t chicken out. (I have to say that I was very impressed that he did it.)

The party was very nice and we all had a good time. By the time we got home, Den was exhausted. He decided to lay down and take a nap. When I woke him up for dinner, he said that he felt much better and fully refreshed.

Now, I know that all this little day to day stuff seems like small potatoes, but with the events of the past year still fresh in out minds…every small everyday task is something to celebrate. We have decided to take nothing for granted…each and every day is a gift. We treat it accordingly.